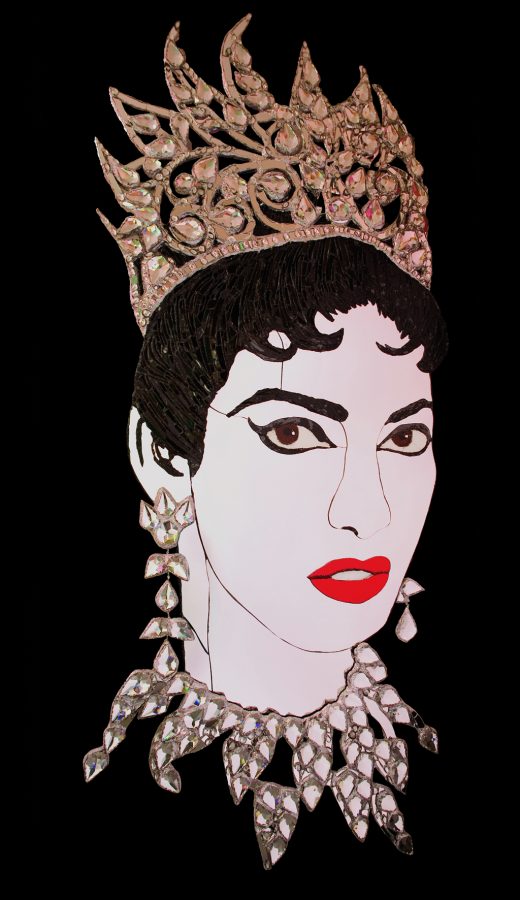 A 2007 wall piece portrait of legendary the opera singer, Maria Callas, in the Franco Zeffirelli production of “Tosca” at the Covent Garden Opera House, which is often regarded as her signature role. The piece was sponsored by Swarovski.
While working at the Royal Opera House on his portrait of Sir Georg Solti, Logan visited the exhibition of Swarovski jewellery originally worn by Maria Callas in her Covent Garden roles. A brochure image of Callas in mid-scene caught his imagination. It was the starting point for his portrait of one of the most famous operatic divas ever as the doomed heroine of Puccini’s opera – in the costume immortalised by director Franco Zeffirelli’s production of 1964. Her performance was legendary. For Logan, Callas was sublime, a woman of passion, ‘she just opened her mouth and the emotions of the world poured out’. He has emphasised her near-cult status today by creating an outsized portrait; her tiara, earrings and collar are created with Swarovski crystal chandelier drops, refracting and creating a halo of light. He
has captured a vivid, mid-performance moment from an iconic production of the Western operatic repertoire, and one of the great operatic Divas, in a superb piece of visual theatre.